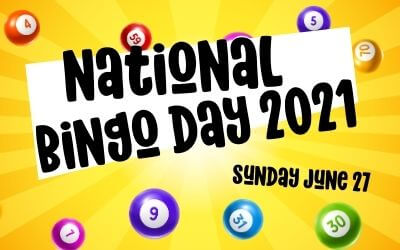 Everything You Need To Know About National Bingo Day 2021

What is National Bingo Day?

Traditionally a US celebration, National Bingo Day is being launched in the UK for the first time in 2021 partly as a celebration of Mecca Bingo's 60th anniversary.

The team at Mecca have been thinking of ways to mark the big occasion, and what better than getting the whole country together to celebrate their passion for all things bingo. When they noticed that no-one had really celebrated National Bingo Day in the UK, they thought why not? Let's try and do something about it.

When is National Bingo Day?

National Bingo Day takes place each year on June 27th, which in 2021 will be a Sunday.

So what's going to happen?

Details are pretty slim at the moment. Mecca Bingo have launched an official National Bingo Day website which promises to announce more details in due course, but at the moment there isn't a lot to say about it.

I think the success of this is whether or not they're going to get other bingo brands involved. If they can get the National Bingo Association behind the campaign, then there is every chance that many of the bricks and mortar bingo halls, including the likes of Buzz Bingo could get involved, but otherwise it may end up being just another Mecca-only promotion.

Rank Group (who own Mecca) also own a number of other online bingo sites thanks to their recent acquisition of Stride Gaming, so there is every chance they could come up with a wider promotion across all their newer brands to spread the word about National Bingo Day to a greater online bingo playing audience. I guess time will tell.

One thing is for sure, I'll be looking at ways in which I can mark the occasion right here at HowAbout Bingo. I'm thinking about some kind of special live-streamed event or competition. Maybe I could get some bingo sites to sponsor it or even put up some prizes.

I'll have a good think and update you guys when we get closer to the big day.