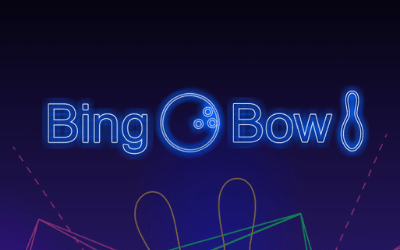 What is Bingo Bowl?

Bingo Bowl is 50 ball bingo game which has a ten-pin bowling theme. The tickets look like a rack of 10 bowling pins, and the numbers come out looking like bowling balls coming out the return chute.

In addition to just looking a bit like a bowling alley, there is also a community jackpot ticket which gives all players a chance to win an two additional prizes. If that wasn't enough, it also has a progressive jackpot too.

To play you must first buy your tickets. The tickets have 10 numbers which are arranged like a set of bowling pins. Rather than being dabbed, these numbers simply disappear from the ticket if their numbers are called.

The game is played for a full house only (or strike) which means you need to remove all 10 numbered pins to win.

The main unique feature of this game is the additional Kingpin Jackpot ticket. This is a shared ticket which appears the same for all players in the room. It has the same setup as a standard ticket.

The ticket appears in the top right on desktop, but on mobile you have to click the 'view kingpin ticket' button to see it.

Every time a player wins house, if the final number called is on the Kingpin ticket, it will be marked off if it isn't already marked off. There are two possible prizes on this ticket:

The 'Any Number' prize is just a small extra prize which goes directly to whoever won the full house in the regular game. However, the 'House' prize is a community prize, with 50% being paid to the winner and 50% shared between all players in the game (proportional to their stake). Once house is called a new jackpot ticket will be generated at the start of the next game.

There is also a progressive jackpot which pays out if you claim full house within 15 balls or less. If triggered, 50% is given to the winner and 50% to the community as a proportion of their stakes.

This jackpot is not seeded, so when it is won it starts building up again from £0.00. It increases by 0.2% of stakes, so isn't the fasted growing jackpot around but still it's a nice extra to the game which already has the Kingpin Jackpot.

Where can I play Bingo Bowl?

This game is exclusive to William Hill Bingo. You can find it in the lobby under 'Specials' but also (confusingly) it can be found in the '90 Ball' tab!