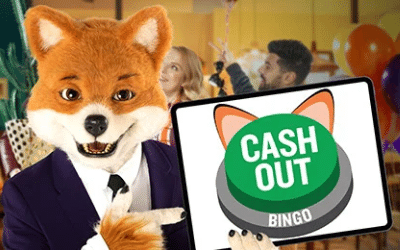 What is Cash Out Bingo?

Cash Out Bingo is 90 ball bingo room that first appeared at Foxy Bingo with the promise that players could choose to 'cash out' part of the winnings before the game has finished.

The game plays exactly the same as any normal 90 ball bingo game, except this is played directly for a full house only.

When a player gets 1 away from the full house, the game is paused and the player(s) get 40 seconds in which to choose to either cash out a smaller guaranteed prize, or continue on to win the larger full house prize.

Is it worth cashing out?

It's difficult to say because it isn't 100% clear, especially to the other players in the room who are not being offered the cash out, how much the cashout prize is going to be. It says on the site that it is proportional to the number of players, but in the game there isn't a visible amount of money you can look at and say that's the pot for those cashing out.

It's all a bit confusing if you ask me. On one occasion I was playing it and I was nowhere near winning bingo. The main prize was £10.50 and two players had been asked if they wanted to cash out. One of those players said yes, and at the end it was revealed they had won £9.50, which was only £1 less than the main prize.

If there were others on 1tg that £9.50 would have been shared, but still it left me scratching my head a bit as to how this all works.

Where can I play Cash Out Bingo?

Cash Out is exclusive to the GVC owned Electraworks network, so you can find it on the following sites: