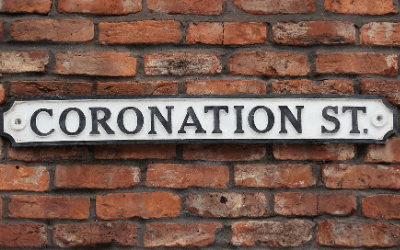 What is Coronation Street Bingo?

As the name suggests, Coronation Street Bingo is a bingo game themed around the famous ITV soap. It plays a regular 90 ball, three-part game, with an extra 'Golden Cobbles' jackpot feature.

Between games there used to be 'classic' clips from the show that are played within the game but since the move to Electraworks software the design got stripped back and these were no longer part of the room. Corrie Bingo is a very popular room and the only one of Gala Bingo's TV themed games that hasn't been bundled together as part of their TV Specials room.

The rules are exactly the same as any other 90 ball bingo game. It plays first for a line, then two lines and a full house. Once you've bought tickets, you just sit back and watch the numbers roll in. The game automatically marks all the numbers and claims bingo for you.

The special feature in this game is the Golden Cobbles Jackpot ticket, which is a shared ticket which plays over multiple games of bingo. It appears above your tickets on desktop, but if you are on mobile it only appears if you click the 'View Golden Jackpot Ticket' button.

This ticket is the same as a normal 90 ball ticket, and every time a player wins full house, if the final number called is on the Golden Cobbles ticket it will be marked off (if it hasn't already been marked off). When this happens, a jackpot prize is paid to the full house winner as follows:

I'm not sure if these prizes are fixed, but when I played the game to review it recently, the 'Any Number' prize was £10 and the 'House' prize on the Golden Cobbles was £500.

The Corrie Bingo room is part of the 'Gala Premiere Jackpots', which is a selection of different games on Gala Bingo which all share the same 5 time-based jackpots:

I'm not 100% sure how these jackpots are triggered, as it isn't 100% clear on the Gala site how it works. But good luck to you if you happen to win one!

Where can I play Corrie Bingo?

Coronation St Bingo is available only at Gala Bingo. You can find it in the main bingo and TV specials sections.