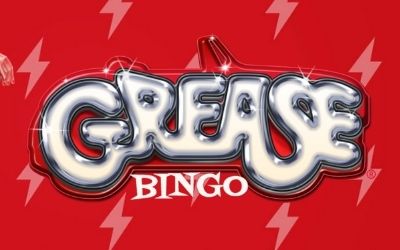 What is Grease Bingo?

Grease Bingo is a 90 ball bingo variant that is themed around the hit musical, Grease, starring John Travolta and Olivia Newton John.

Both of the title characters Danny Zuko and Sandy Olsson can be seen in the game background, which is themed around the final act of the film where Danny and Sandy dance to "You're the one that I want" at the fair. This song is also the inspiration for the only unique feature of this game.

The game music is similar to the music you'll remember from the film, but it's not exactly the same. No doubt they couldn't get full permission to use the original soundtrack, which would have taken this game to a whole new level if it had. It's a shame because they could have done a lot more with this IP in my opinion, maybe had some kind of bonus round involving the characters and maybe even a Rizzo sound a like calling the numbers.

You're The One That I Want Jackpot

The main unique feature of Grease Bingo is a fixed jackpot of £50 that is paid out to the full house winner, but only if the final number they claim bingo on ends in a number 1. So for example, 1, 11, 21, 31, etc.

I've never seen a feature like this before so it is unique, but it's not the most exciting of features.

No doubt to make things a little more interesting there is another jackpot available in the Grease Bingo room which is claimed if you call full house within 35 calls.

Where can I play Grease Bingo?

There is every chance when you're reading this that the game is no longer available. It's been a bit strange in that it first appeared at the back end of 2019, but then strangely disappeared only to pop up again in the Summer of 2020 as a Saturday only room. At the time of writing this the game appears now to only be available on Sundays between the hours of 12.00pm and 12.00am.

It's exclusive to the Playtech network, but not every bingo site has the game. If you happen to be playing on a Sunday, have a look at the lobby of your favourite Playtech sites and see if it's there.