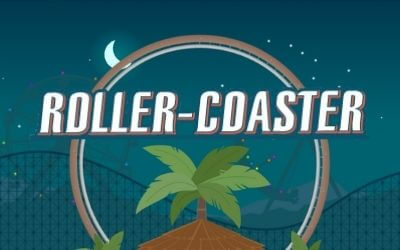 What is Tombola Rollercoaster?

Rollercoaster is a fun bingo game available exclusively at tombola. It's essentially a 40 ball bingo game but instead of bingo tickets your cards are seats of a rollercoaster, and instead of numbers the balls are little characters who fall off the rollercoaster each time it loops the loop!

It's one of tombola's oldest games and as a result was originally built in flash technology, which many internet browsers no longer support. So in January 2021 the game was completely rebuilt from the ground up to work on all devices. The newer version plays largely the same, but now the game has the option of different ticket prices. There are also some minor cosmetic differences and little touches to the game that aren't hugely important, but add to the overall experience of the game in subtle ways.

How to play Rollercoaster

The tombola Rollercoaster contains 40 differently named balls. When the ride starts, each time the rollercoaster passes, a ball will drop.

You can buy up to 4 tickets per game and there are 4 ticket prices:

Simply select your stake and click buy to purchase a ticket. Each ticket contains 5 balls with unique names.

There is one standard prize in the game, plus two jackpots that can be won if you win within 5 or 6 balls.

The Game Prize is shown on the left and is awarded to the first player to fill one of their carriages. On the right you will see a Jackpot sign with two prize amounts.

Rollercoaster is now on mobile!

One of the best things to come out of the new redesigned rollercoaster bingo game is that it is now playable on mobile devices for the very first time. Just login to tombola via the mobile app or from your mobile browser and select the game from the list.