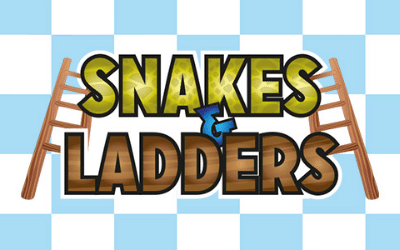 What is Snakes & Ladders Bingo?

Snakes & Ladders Bingo is an unusual 90 ball bingo variant that has a unique feature game that plays out at the end of the game. Unlike most feature games, this one can only be activated if you finish a game of bingo on 1 to go.

It does feature a cartoon snake within the design, so some of these have been censored in our screenshots as they could be deemed 'appealing to under 18s'.

The game plays just like any regular game of 90 ball bingo. First you play to win 1 line across, then 2 lines and finishing with a full house. At the end of the game the Snakes & Ladders feature then comes into play for all the players who have at least one ticket on 1 to go.

If that's you, congratulations you will now move on to play the feature game.

The feature game will only appear to those players who managed to finish with at least one ticket on 1TG. If you are the full house winner, you can still activate the feature game if any other of your tickets finished on 1TG.

If you do not qualify then nothing appears to happen, only qualified players even see the feature happening.

Each of the squares has a cash value on it, and you win whatever value your counter ends on after 3 rolls of the dice. The top prize for getting to the final 25th square is a fixed jackpot of £500. If this is triggered the money is shared with all the players who qualified.

Where can I play Snakes & Ladders Bingo?