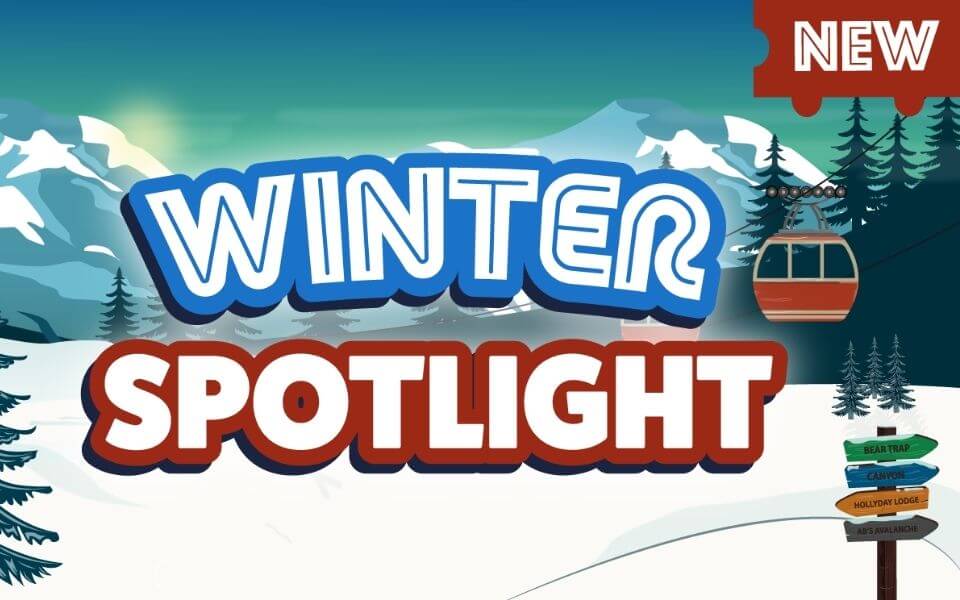 What is Winter Spotlight Bingo?

Winter Spotlight is a new game from tombola which is said to be their first 'seasonal' bingo game. By this they mean it will be a limited time only game, played only in the Winter season.

My guess is that they will re-use the actual game mechanics and rebrand the game to other seasonal events throughout the year. For example, at Easter they could turn it into a spring theme with bunnies hopping about and they could call it Easter Spotlight. That's my prediction anyway.

So how do you play Winter Spotlight?

As with many tombola games, Winter Spotlight allows for the user to choose their stakes:

The amount of prize money you then get to play for is proportionate to the amount you choose to stake.

Once you've bought into the game, you will see your ticket appear as part of a 15 piece jigsaw.

You'll notice how the image of the Winter scene is static and greyed out, but as your numbers get called and pieces of the jigsaw are taken away, the vista behind becomes colourful and even moves, with a fun animation of a skier going down the slopes and cable cars moving across the mountains.

You can either let the game remove the pieces for you, or you can drag the pieces yourself from the caller onto your ticket yourself, which is a nice little touch that adds a bit of fun to the gameplay.

There are two prizes on every game: All four corners and then a full house.

Be the first player to clear all four corners of their jigsaw to claim the corners prize, then obviously get all the other numbers first to win the full house prize. There is also a jackpot that is triggered by claiming full house within 28 calls or less.

When someone has won, a snowball will splatter on the screen to reveal the winning player's username.

As I mentioned earlier, as you get more numbers on your ticket and the vista behind the numbers is revealed, you will notice it starts to get more colorful and animated. Well, the fun doesn't end there.

As an extra bit of fun, tombola have made the background interactive, meaning you can touch it and sometimes different things will occur. For example, you can tap on the cable cars to make them wobble and you can even chop down the tree or even make the skier crash into it!

All these little extra touches are the kind of thing that tombola loves putting into their games, and it does make it all the more entertaining for it.

Tombola are simply knocking it out of the park recently with their newest games, and this one is just the latest in a long line of brilliantly unique and quirky bingo variants that I've really enjoyed.

The only downside to the game at the moment is that it is very busy, and when I've played there has only been the one room. As a result I've not managed to get a win yet with upwards of 300 players to compete with.

But all those little extra touches and animations do make it a fun game to play, so I'll keep going until I do get a win.

Play it now while it's still available, and I'll be keeping my eye out for a new version further in the year which must surely be in the works.