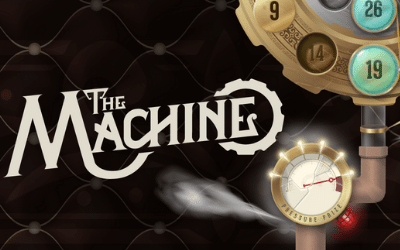 What is The Machine?

The machine is an unusual 40 ball bingo game which sees players compete for two prize pots via an unsual bingo contraption known as The Machine.

As the cogs turn, players could win one of two prize pots or steal the lot by triggering the special 'Pressure Prize'.

To play The Machine you can buy a ticket which costs between 10p and £1. The prize you can win depends on the price of the ticket you buy. Choose your ticket price by pressing the keys on the purchase screen. Click 'buy' then 'confirm' to buy your ticket.

You have 20 numbers on your ticket: 8 on the silver cog and 12 on the gold cog. During the game, numbers are called in the bottom right hand corner of the screen. When a called number matches a number on your ticket, it is marked off on a cog.

Where can I play The Machine?

This game is an exclusive game available only at tombola. It is playable on both desktop and mobile devices.