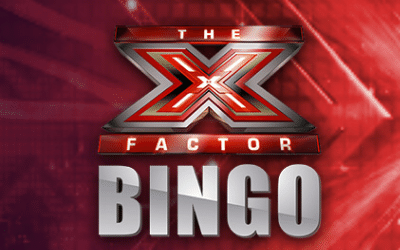 What is The X-Factor Bingo?

The X-Factor Bingo game is a 90 ball game with a 'Judges Jackpot' feature that gives players extra chances to win. The game is obviously themed around the X-Factor TV show, including the balls being called out in the booming voice that is associated with the show.

In each bingo game there are three prizes to be won - 1 line, 2 lines and full house. Once you've bought your tickets, the game plays out automatically so all you have to do is sit back and hope your numbers come in.

A separate bingo ticket is displayed on the Judge's panel within the game. This is the same for all players and plays across multiple games. If you claim a full house and the last number called matches a number on the Judge's ticket (that isn't already marked off), you'll win a Judge's Jackpot prize.

On desktop you can see the Judges ticket on screen, but on mobile you'll have to press the 'View Judges Jackpot Ticket' button to see it.

Occasionally additional feature prizes such as '1TG' may be added to games. This means any players who had 1 number left to go (1TG) on their ticket when full house was won will also win a prize.

Where can I play X-Factor Bingo?

X-Factor Bingo is an exclusive game available only at Mecca Bingo. It is open daily from 10.00am - midnight.