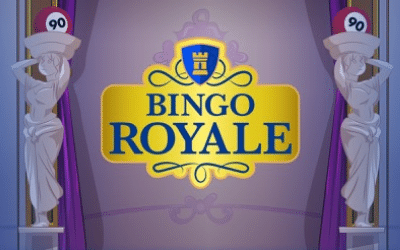 What is Bingo Royale?

Bingo Royale is a special 90 ball bingo game that is available exclusively at Jackpotjoy. It has a unique feature whereby even after a full house has been won, players could still be given up to 5 extra balls to create even more winners.

Once you've opened the Bingo Royale room, buy tickets for the next game by pressing the 'buy' button if you're on desktop or tablet. If you're on mobile, click the little icon in the bottom left that looks like a ticket stub.

When the game begins, all the tickets will be auto dabbed and if you win it will also auto claim, so you don't need to do anything other than sit back and enjoy!

The game plays like any regular 90 ball bingo game, playing for one line, two lines and then full house. However, in roughly 3 out of every 10 games, the special 'Royal Pardon' feature will kick in at the end of a game.

When the Royal Pardon feature is activated (at random) the little corgi dog will bark up to 5 times. Each bark sends an extra ball into the game, giving players another chance to get a full house. Any players who manage to claim a full house as a result of the extra balls wins a share of the Royal Pardon jackpot.

I know it's meant to play in 30% of games, but I've had sessions in this room where I've played every game for well over an hour and it's never appeared. Perhaps it is more likely to play out when there are more people in the room.

In addition, there is another fixed jackpot that can be triggered by claiming full house in 36 calls or less. On a 10p game, this super jackpot is £1,000.

Where can I play Bingo Royale?

The game is exclusive to Jackpotjoy and should be found on the main bingo page.