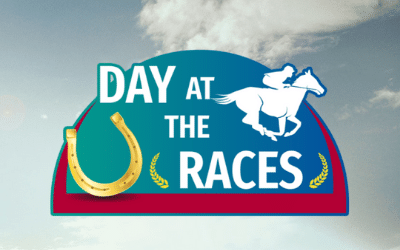 Day at the Races Bingo

What is Day at the Races Bingo?

Day at the Races Bingo is a 40 ball bingo game from William Hill that is obviously themed around horse racing. If you've ever played Rainbow Riches Bingo, it is essentially the same game repackaged - so much so, even their help page for this game has copy that refers to 'steps on the rainbow'.

Someone clearly was lazy there with a bit of copy & paste!

Just like Rainbow Riches Bingo, the game is played with tickets that have 8 numbers on them, split into 2 groups of 4, called 'clusters'. The game is played first for 1 cluster, then 2 clusters (full house).

In addition to these main prizes, there is also a fixed jackpot feature, that again works exactly the same as the jackpot in Rainbow Riches Bingo.

Day at the Races Jackpot Feature

When the game is in play, you'll see a jockey on a horse running along at speed. Above the rider is a set of numbers from 1 to 50. As each game is played, there will be random occasions when a rosette is called instead of a number. When this happens (up to a maximum of twice per game) the horse will move that many spaces along the track.

While travelling along this track, the horse and jockey can find 3 jackpot trophies at different lengths along the track. These are:

If the horse lands on, or passes one of these steps then the prize pot for that step will be shared amongst all players who bought a ticket for that game. The amount of money is dependent on whether the horse lands directly on the number, or if it passes it.

When you first enter the room, have a look how close the game is to any one of these jackpots. If it is only a few steps away from winning, then it's a great time to join that game.

Where can I play Day at the Races Bingo?

This game is exclusive to William Hill Bingo, although it is suprisingly difficult to find. It isn't currently on the main bingo rooms tab on the Will Hill website, but once you're in the main bingo lobby that pops up, it can be found in the 'Specials' tab.