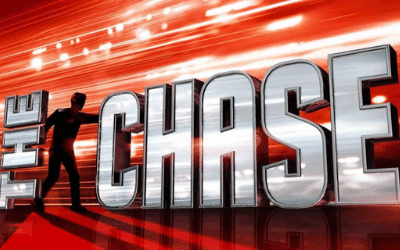 What is The Chase Bingo?

The Chase Bingo is a 90 ball bingo variant with a feature game based around the popular ITV daytime quiz show, The Chase. It is now part of the TV Specials room over at Gala Bingo.

The game plays like any other 90 ball bingo game. There are prizes for the first player(s) who complete one line, two lines and a full house. It is only at the end of the game that the special 'Beat the Chaser' feature game comes into play.

Whoever wins full house gets to play the 'Beat the Chaser' feature game. The winner is offered three amounts to choose from. The player will have 10 seconds to make their decision. If they fail to choose in time, the middle value will be automatically selected.

Just like in the TV show, the higher value will be further away from home and closer to the Chaser, so it is a risk the player has to make if they want the larger value.

Once the prize money has been chosen it moves on to the Chase board. The board is divided into 7 steps and the player's starting position will depend on which of the three values they chose.

Once selected, the player will play against one of the Chasers from either:

The aim is for the player to 'answer questions' correctly to move down the board to 'Home' before the Chaser has caught up to them.

You don't actually answer any questions!

At this point the game does start to feel a bit odd, mainly because it says 'Question 1' in the top left, but no actual questions are being asked! Instead it just simulates whether or not the questions were answered correctly.

If it thinks you got the answer right, it gives you a tick and you move down a step. If it thinks the Chaser got it right, their arrow moves once step down after you. Annoyingly, it may also predict you got the question wrong, giving the Chaser an opportunity to catch you.

If you get all the way to 'Home' without being caught by the Chaser, you win the full prize amount. If the Chaser catches you, you get a smaller consolation prize which is 50% of whatever the lowest value was at the start of the feature game.

There is also an additional Jackpot which can be triggered by winning full house within 31 balls or less. When triggered this jackpot is shared between the full house winner and the community.

Where can I play The Chase Bingo?

This game used to have it's own room but in 2020 it was moved to become part of the TV Specials room. This room is open every day from 8.00am - 2.00am exclusively at Gala Bingo.

The TV Specials room has other TV-themed games on a rotation, so The Chase Bingo is only available at certain times. The best way to find out precisely when is to open the room and click on 'schedule' to see when it is due to be played.