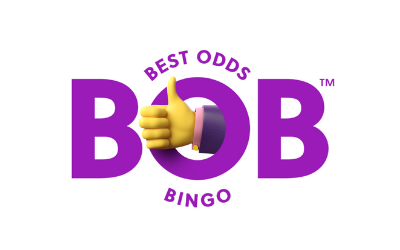 What Is Best Odds Bingo?

Best Odds Bingo (or BOB) is a 50 ball bingo game where every player has an equal chance to win.

How is it equal?

BOB games are limited to a maximum of 25 players per room, so it's never overcrowded. Also, every player has the same number of tickets (10), which means an equal chance for everyone in every game.

Where can I find the BOB rooms?

There are three BOB bingo rooms that are based on price: 50p, £1.50 or £2.50. On desktop the rooms have their own tab on the left, but they also appear in the 'all rooms' list when you are first logged in.

However, on mobile for some reason they're not in the main list of rooms, so to find them you must tap on the 'BOB' button at the bottom left (pictured below).

What time is BOB open?

The BOB rooms are not open 24/7 so you may need to check the schedule for the exact opening times, but as of the time of writing the opening times for BOB are:

How to play Best Odds Bingo

The first thing to do is to buy your tickets. Because it is fair-and-square you only have the option to buy 10 tickets and this will be whatever price room you've entered (50p, £1.50 or £2.50).

The game is played for a full house, and the numbers are called very fast, so fast in fact you don't hear them being called out. All you get is a little 'ding' noise as each ball is called.

The BOB game has the little hand as it's logo, and within the game this is used to display how many numbers away from bingo you are. So when you are 3 away, the hand holds up 3 fingers. The hands also appear on the ticket when you mark off a number.

In addition to the normal house prize, there are two possible jackpots you could trigger in BOB if you are lucky enough to claim house within a certain number of calls.

This jackpot is a progressive that starts at £100 and grows by 1% of the cash stakes put into the game by players each round it is not won. It is paid out if a player calls full house in 16 calls or fewer.

Where can I play Best Odds Bingo?

BOB was previously an exclusive game for Mecca Bingo, but it has since rolled out to Lucky Pants Bingo, which is a new sister site to Mecca.