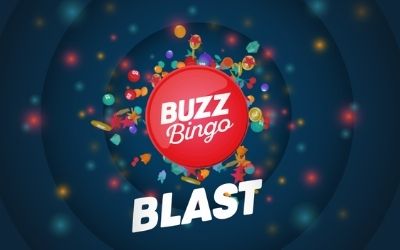 What is Buzz Bingo Blast?

Buzz Bingo Blast is an exclusive 36 ball bingo game available only at, you guessed it... Buzz Bingo.

It plays quite a lot like the 50 ball Emoji Bingo game, with the numbers floating around the screen and then disappearing as each number is called, but obviously with just 36 numbers this game plays a bit quicker.

You can only buy one ticket for this game, but what you can control is how much you spend on that ticket. By default it appears as £2 a ticket, but you can change this to either 20p, 40p, 80p or £1.

The prize money will change depending on which option you choose. Obviously the bigger your stake, the larger the potential prize money on offer.

The game plays for a straight full house and as each number is called, if it appears on your screen it will burst in a shower of confetti and then disappear. The first player to have all 12 of their numbers disappear is the winner.

You can choose to pop the numbers yourself or just let the game do it automatically. As it is so fast, you don't hear the numbers being called, just a little 'beep' noise as each is called, which personally I find one of the most annoying noises in online bingo.

There is a progressive jackpot which can be triggered if you claim the full house in 18 calls or less. It is seeded at £100 and will be split between all players that have bought a ticket, proportional to the amount each player staked in the game.

When is Buzz Bingo Blast open?