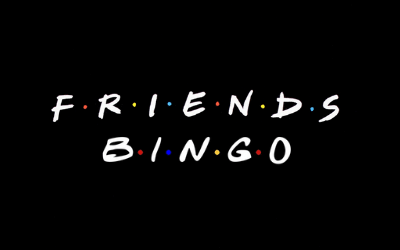 What is Friends Bingo?

Friends Bingo is a 90 ball bingo game based around the hit TV show Friends. Players get to choose a team of either Phoebe, Chandler, Rachel, Ross, Monica or Joey. Their choice of character will later influence whether or not they receive a share of the additional community jackpot.

There is also an additional 'Central Perk' jackpot ticket, which awards further prizes based on the final ball called in each game.

There is a lot going on in Friends Bingo, but it is one of those games where to a new player it can be a bit confusing at first.

The basic game plays just like any regular 90 ball bingo game, with a prize for getting one line, two lines and then full house. The only things you need to know about that are a bit different is the 'Central Perk' jackpot ticket, and how your choice of character affects whether or not you'll win the community jackpot. Both of which are explained below.

To select your character, you must first click the 'buy tickets' button, which then allows the ticket purchasing screen to pop up. Above or alongside the ticket options is a picture of all six characters, one of whom will have a coloured circle behind them. Each of the friends has a different colour.

It isn't immediately obvious, but if you click on the image you can change the character you want. So if you click on Rachel the coloured circle will change to pink and you will see the team name has changed to Team Rachel.

Once you are happy with your team choice, select the number of tickets you want and then press 'buy tickets'. The game will then countdown to begin.

Why do I need to choose a character?

The reason for selecting a character is all to do with the community jackpot, which is the real unique feature about this game. The prize money you can win is much smaller than the 'Central Perk Jackpot' (see below), but it is a funky little feature which pays small amounts every single game.

It is easier to see what's going on if during the game you click on the balls being called to open up this view (below). It shows each of the six characters and a row of 15 numbers that belong to their team. It's all colour co-ordinated so you should be able to make sense of whose balls belong to which team.

The team who has the most balls called from their group at the end of the main bingo game will win a share of the community jackpot. It's easier to see who is winning if you switch from the 'balls called' view to the 'leaderboard' view.

Below you can see Team Ross has 14 of their 15 balls already called, and it is likely at the end of the game everyone who chose Ross will win a share of the community jackpot of £3.00.

The Central Perk jackpot ticket is a community ticket that is the same for all players and plays over multiple rounds of bingo. It is the same mechanic as you will find on many Playtech bingo games, such as Coronation Street Bingo (Golden Cobbles Jackpot) and Deal or No Deal Multiplier (Box Jackpot Ticket).

Every time a player wins full house, if the final ball called is on the Central Perk ticket, it will be dabbed off (if it hasn't already). There are then four possible prizes that can be awarded depending on what numbers have already been dabbed:

How to win at Friends Bingo

There is no guaranteed way to increase you chances of winning other than to max out on tickets, which is never something I recommend. However, if you choose to go that route, the maximum you can buy in this game is 48 tickets and the price is usually either 2p or 5p. So at 5p that would be a total £2.40 max stake.

Where can I play Friends Bingo?

Friends Bingo is exclusive to the GVC owned Electraworks network. It is open from 7.00am - 1.00am daily at the following sites: