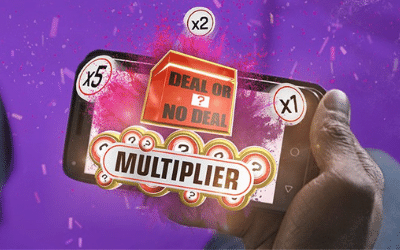 Deal or No Deal Bingo Multiplier

How to play Deal or No Deal Bingo Multiplier

Deal or No Deal Multiplier Bingo is a 90 ball variation on the popular Deal or No Deal TV show, not to be confused with similar DOND Bingo games (see DOND 90 and DOND 75). It features a jackpot ticket and a multiplier feature that can increase winnings up to 5x.

The game is a standard 90 ball format, with prizes for 1 line, 2 lines and a full house. However, it has a couple of features that make it a little different.

Before each game begins, each player who has bought tickets for the game will be awarded a random multiplier feature. This will appear on screen after ticket sales have closed, and could be anything up to 5x.

If you win any of the 1 line, 2 lines or full house games, your winnings will be multiplied by whatever your amount was. As far as I'm aware, this feature is exclusive to this game and never used in any other Playtech bingo room up to now.

Unlike the multiplier feature which is a totally new innovation, the jackpot ticket is something we've seen before from Playtech. A similar feature exists in other themed games such as Coronation Street Bingo (Golden Cobbles Jackpot) and Bingo Bowl (Kingpin Jackpot).

It is a community bingo ticket that plays across several games of bingo. Every time someone wins full house, if the final number is on the Box Jackpot ticket, it will be marked off if it isn't already. There are then four possible prizes that can be awarded, depending on what numbers have already been marked:

The 'Any Number' prize is awarded if the number is on the Box ticket, but doesn't complete a line, 2 lines or full house. The other prizes are split 50/50 between the player and the community. Once the full house prize has been won, a new Box Jackpot ticket is generated at the start of the next game.

Where can I play DOND Multiplier?

This game was originally an exclusive to Sky Bingo when I did my first video playthrough of the game, but it has since been rolled out to Paddy Power Bingo and Betfair Bingo also. You can find it in the main bingo lobby and on the 'Specials' tab.

When is the Deal or No Deal Multiplier room open?