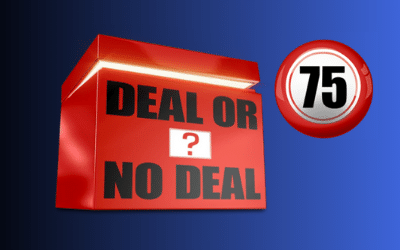 Deal or No Deal Bingo 75 (Playtech)

How to play Deal or No Deal Bingo 75

This game is the 75 ball version of the extremely popular, Deal or No Deal Bingo 90. It too is one of the most popular bingo games on the Playtech network.

The game played is usually a 5 line game followed by the Deal or No Deal feature. This means each round there are six prizes to win:

The amount of money you may be offered in the Deal or No Deal feature is linked to what numbers are called during the regular bingo game.

Deal or No Deal Feature

Just like DOND 90, at the start of the game you have one red box with a mystery amount inside that could be anything from 1p to several hundred pounds. There are also another 21 boxes, each with a number on it from 1 to 90.

When the normal game of bingo begins, if these numbers are called, that box is opened and the amount inside is revealed before disappearing. Just like the TV show, what you want at this point is all the low-value blue numbers to be revealed, leaving only the higher amounts for when it's time for the banker's deal.

When full house has finally been won, the winning player then gets a deal from the banker based on the values of the remaining boxes. The winner then has to chose whether or not to accept (deal) or reject (no deal) the banker's offer.

To help decide, all players who bought into that current game get to vote on whether they think you should deal or no deal. Ultimately, it is down to the full house player to decide. Sometimes a no deal will pay off, sometimes you'll end up with less than the banker's offer.

In addition to the regular prizes and the DOND Feature prize, there is also a progressive jackpot. It is seeded at a massive £7,500 and increases every night at midnight based on 2% of all stakes. It is won by claiming full house within 34 calls and is split 50/50 between the full house winner and the community.

Where can I play Deal or No Deal Bingo 75?

This game is available on all Playtech sites, such as: