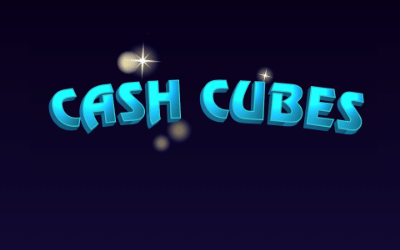 How to play Cash Cubes Bingo

Cash Cubes is technically a 36 ball bingo game, but it looks unlike any regular bingo game you've ever played. It is really fast paced, with a progressive community jackpot and 'cube collection' feature that allows you to trigger additional prizes.

There are four ticket prices which are displayed by four different coloured cubes.

The regular '4 cubes' prize will change depending on your ticket price, but it is also worth selecting a stake and sticking with it, because of how the 'cube collection' feature works (read on for more info).

Instead of a standard ticket, you have 12 numbers which are placed on the edges of four diamond-like 'cubes' which are placed in a 2x2 grid. When numbers are called, if they appear on your cubes, that side of the cube will light up yellow. Light up all four sides of a cube and it will break out and move to the bottom of the screen.

Be the first player to break out all 4 of their cubes to win. Even if you don't win full house, if you've managed to break out any number of cubes during the game, they get added to your 'cube collection'.

In each game there is one standard prize which is called the '4 Cubes' prize. This goes to the first player to break open all four cubes.

There is also a progressive Cash Cubes Jackpot which is seeded at £500 and increases by 5% of player stakes each game until won. If anyone gets full house within 18 calls it is triggered and 100% of the pot is shared amongst the community, based proportional to their stake.

One of the unique features of this game is the 'cube collection'. Every time you manage to break open a cube during a regular game, those cubes drop to the bottom of the screen. Then at the end of each game, even if you didn't win full house, those cubes are counted and added to a collection.

Once you have colected 50 cubes in a collection, you win the corresponding prize:

Not huge amounts, but nice to have that chance over time to get something back for your continued play. Also, it is important to know the game will remember your totals, so even if you go away and come back weeks later, your collections will be there waiting for you.

How do I know how many cash cubes are in my collections?

On desktop there is a little box with an arrow pointing to the left, just where the main game screen is. If you click this arrow, a screen will slide out which shows you how many cubes in each collection you have got.

On mobile you can see your tally in two different places. Firstly, when choosing ticket price there is a box at the top which shows the game prizes. Your tally for each collection will flash up here every few seconds. Then secondly, when the game begins you get the same arrow as found on desktop, which slides the collection information across the screen.

Where can I play Cash Cubes Bingo?

Cash Cubes is available only on Playtech network, but not every brand has chosen to have the game. At the time of writing it was available on the following sites: