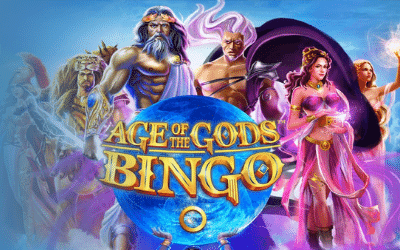 Age Of The Gods Bingo

How To Play Age of the Gods Bingo

Age of the Gods Bingo is 90-ball bingo room with a special feature that is triggered on random games. At the end of games where the feature is triggered, the full house winner plays the 'Arena of the Gods' feature game, which reveals the god that will be giving the award.

The regular game plays exactly like any other 90 ball game, playing to win 1 line, 2 lines and then full house.

Arena Of The Gods Feature

When the feature game is triggered, a screen will appear with 9 coins in a 3x3 pattern. Whoever won the full house gets the task of selecting coins until they reveal 3 matching gods. If full house was split between multiple winners, then the coins get chosen automatically.

Each god has a different award, some which pay to the full house winner only, others pay to the community.

There are 4 prizes available:

To be eligible for a community prize, you must have bought tickets to the game that is currently in play.

Where Can I Play Age Of The Gods Bingo?

AOTG Bingo is available only at Playtech bingo sites, but not every brand who uses Playtech has it available. You can find it at the following sites: